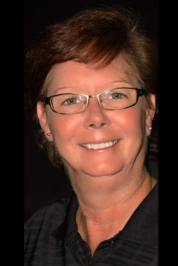 Hall of Fame Volleyball Coach Amy Baker is our 2016 Honorary Captain for the All Star Event.

Amy Baker retired at the end of the 2011-12 school year from Davenport North High School.  The hall of fame coach was a Physical Education Teacher and Head Girls Volleyball Coach for 26 years at North, but 33 total in the Davenport District.

Coach Baker started and developed a state-power in volleyball at Davenport North.  Coach Baker earned a career record of 648-335 in 30 years including a brief stint at Davenport Central where she was also involved in that schools only state volleyball title.  Davenport North opened its doors in 1985 and Coach Baker was the first volleyball coach and was a Wildcat ever since.  At North, the volleyball team collected 597 wins, 7 conference championships, 10 state tournament appearances collecting 2 state championships and 3 runner-up finishes.  Coach Baker was tabbed conference coach of the year 9 times, Iowa State Coach of the Year and was a finalist for National Coach of the year in 2001.  The Wildcat Volleyball program produced multiple all state performers, and countless number of collegiate volleyball players.  During Coach Baker’s tenure, North produced two Iowa Player of the Year; Kathy Kundel and Carrie Gilley.  Coach Baker is a member of the Quad City Times Hall of Fame and the first female inducted into the St. Ambrose University Hall of Fame and in the Iowa High School Coaches Hall of fame. Coach Baker currently is still involved in officiating high school volleyball.