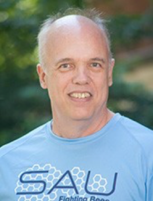 Bruce Billingsley, the winningest coach in St. Ambrose volleyball history, was at the helm of the Queen Bees for 19 years after seven years at the former Marycrest International University. He led the Queen Bees to back-to-back NAIA National Championship Tournament appearances in 2009 and 2010, and is a six-time Midwest Collegiate Conference Coach of the Year.

Billingsley started the men’s volleyball programs at both MIU and SAU.

Milestones:Billingsley picked up his 600th career win when SAU defeated Grand View 3-0 on Oct. 23, 2012. He earned national recognition in 1995 by winning conference championships and coach of the year honors in the same school year with both his men's and women's teams at Marycrest.

Leadership in Volleyball: Billingsley was on the Board of Directors for the Iowa Region of USA Volleyball during the transition of the organization from volunteer based leadership to a permanent office with full-time staff.

He was the National Commissioner for NAIA Men’s Volleyball during their transition from a non-sanctioned sport to a recognized National Invitational Tournament and finally to a National Championship Sport.

Billingsley has been the tournament director for over 100 tournaments, including youth, collegiate and adult at the local level and eight NAIA Men’s Volleyball National Tournaments.

During 26 years of volleyball camps, Billingsley along with his assistant coaches and players hosted over 7000 campers.

In addition to coaching, Billingsley was an assistant athletic director and sports information director at St. Ambrose. He currently teaches two or three classes per semester in the Department of Kinesiology.

Coach Billingsley and his wife Linda have two sons, Randy (28) and Matthew (25).